Mum Tips
Home Feeding Starting solids: An experience that is bound to produce the first of... 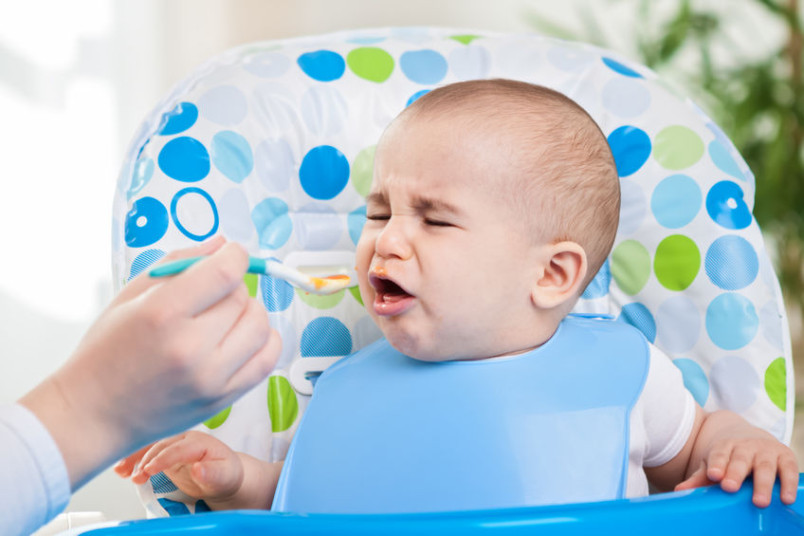 Starting solids. It’s a milestone that I looked forward to for reasons unknown. I think I thought it’d be easier than breastfeeding? Like maybe he’d finally stop pawing at my boobs in public and maybe, just maybe he might sleep longer than 3 hours in a row? Well just like all my assumptions regarding anything about mothering an infant, he didn’t and he didn’t.

Giving Thomas food for the first time was by far the most terrifying thing I’ve done so far with my baby. I had decided I wanted to do this via the Baby-Led Weaning (BLW) route. (Baby-Led Weaning is a recognized method of introducing solids to children and is encouraged by my GP and child health nurse. This is in no way an advisory article on starting solids – Please discuss with your healthcare provider before commencing with your own children.) The clue is in the name – babies decide when they’re ready to start solid food, they grab it and consume. In hindsight I realized I dutifully ignored this and kept trying to shove foods at him in the hopes he’d suddenly find a likeness for it. I’d present him with fruit, steamed veggies, toast and then wait there expectantly for him to put it in his mouth, chew thoughtfully and then exclaim, “Gee whiz mum, this is delicious!”

I gave him a banana first. He just looked at it. And then at me. I could see the unasked question on his face. “What the bloody hell is this?” He smooshed it in his fingers and promptly threw it on the floor. Avocado? The look of disgust when he put it in his mouth… He was appalled. This is a kid that for the first 6 months of his life has had nothing but top-shelf boobie juice from the source. Even bottled breast milk was shunned. Toast? Actually he loved toast. Sucked all the butter off it before throwing it out the side of his highchair to our dog, who I’ve just noticed has gotten visibly more rotund since we started BLW.

We kept offering food and slowly but surely, he started putting it in his mouth. (Sidebar: why is it that they put EVERYTHING in their mouths including grass, shoes, the dog’s tail, but the minute you give them food they’re suddenly unsure? Anyone?) And that’s when we discovered that Tom has a rather sensitive gag reflex. And I mean SUPER sensitive. I don’t remember what food he first gagged on, but I remember the cold feeling that overtook my body when I looked at his surprised little face

Now here’s the thing with BLW. I’ve done a lot of research on it. I get that gagging is ultimately a part of introducing foods to my son. I know the difference between gagging and choking. I know that gagging is actually a good thing, because it helps him to learn and work out how to swallow, how much to take into his mouth and means he’s less likely to choke. I also know what do to should he start to choke. I know all of this. And yet nothing prepares you when you see your own son gagging on… well everything. My heart stopped every time. My husband and I would be on the edge of our seats each time he put something in his mouth. He’d have it in his mouth for ages, struggle with it, gag and then promptly vomit, while we worked ourselves up into a panic, certain he was going to die via wedge of pumpkin or slice of rockmelon.

After maybe 3 or 4 episodes of this, I called it off. “That’s it! We’re doing purees! I cannot handle the stress!” And so I steamed and blitzed the heck out of some veggies and force-fed them to Tom. And do you know what? He still gagged and vomited. The kid struggled with anything thicker than breast milk. Even yoghurt ultimately ended up all over both of us. I was so discouraged and worried. 6 months old and not even a little bit interested in food. In saying that, while it was distressing for us to see, Tom really didn’t seem to be bothered by the repeated gagging. Mildly startled perhaps, but I could see he wasn’t really interested in eating at all. Zero fucks given.

“COME ON HE’S 6 MONTHS OLD!” I kept shouting to myself. “He’s supposed to start solids! It’s time!” I’d do the thing you’re not supposed to do and compare him to my friend’s babies, all of whom were eating with gusto. And while I kept offering him foods, I’d also intervene quickly by yanking whatever I just gave him out of his mouth whenever I thought he might potentially gag. The poor kid hadn’t a clue what was happening. Then I went to get him weighed at 7 months and it became clear he wasn’t gaining enough to stay in the 50th percentile he’d been smack in the middle of since birth.

The GP and nurses assured me it was nothing to worry about. He’d started crawling, he was meeting all his other milestones, he was breastfeeding less throughout the day, lots of babies drop a percentile around this time, we’ll just keep an eye on it. But that evil mother’s guilt consumed me and I convinced myself that I’d been starving my child and depriving him of essential nutrients. Real tears were shed. Operation: MAKE TOM FAT became my mission.

The first step was basically for my husband and I to just toughen up. Since Tom gagged at everything anyway we decided to continue with BLW. And I don’t know if it was practice, or we got braver, or he was suddenly ready to start eating (my little late bloomer) but he actually started to swallow food. And keep it down. Avocado suddenly became his favourite, with the added bonus of being excellent for his skin. I know this as he chose to paint his face with it every time I gave it to him.

The second step was to give him foods high in (healthy) fats. Aforementioned avocado featured most days, as well as coconut yogurt and peanut butter. Quite the eclectic mix. And while there were of course still gagging episodes, they happened less and less and *touch wood* he’s never choked (except on a piece of grass he attempted to eat at the park one day. Likes to spice things up, that one. Don’t worry he was fine.) We’ve started to get more adventurous with food and now Tom pretty much eats whatever we have for dinner, minus any added salt/sugar/chilli. Tonight he had steak. STEAK! This is a kid who couldn’t swallow yoghurt who now enjoys meat above any other food. It is amazing to watch. And I am happy to report that at his 8 month weigh-in, Tom’s weight is on a healthy trajectory upwards. SUCCESS!

Don’t get me wrong. While I’m happy my kid is eating, starting solids is a pain in the arse. It’s messy. It’s time-consuming. Breastfeeding is WAY easier. Their poo changes and starts to smell like… well, like shit. It took us almost 3 months to get comfortable with BLW, but I’m so pleased we’ve done it this way. While the comments from people, including “OMG! You can’t give him that, he’ll choke!” do get annoying, especially after you explain how and why BLW works, when they see Tom eating real food with ease they soon shut up. I know BLW is not for everyone, but this is what worked for us. For those who struggled with introducing solids, it does get easier! I’d just encourage parents to research and talk to their health providers before introducing solids to their own children.

Looking for some food ideas?  You may like these articles 10 Baby Purees,  10 homemade solid foods your baby will love or more ideas in the Recipe category

Get Your Heart Racing with These Adventure Holidays

Showering When You Have A Baby

Tips for brushing your toddlers teeth

How to speed clean your bathrooms in 15 minutes

The idea here, is to bring you a collection of the most interesting articles from around the massive online world, so you can come to just one place and find tips, tools and inspiration in just one place.
© © 2019 mumtips.com.au | All Rights Reserved
MORE STORIES
Feeding

What to Eat and Not Eat While Breastfeeding

Helen Michaels - May 10, 2016
1
For mothers in need of some dietary information pertaining to what to eat when breastfeeding, and what not to eat for that matter, there...