Mum Tips
Home A dose of Reality Nappies – The good, the bad and the Scary!

I heard somewhere recently that each disposable nappy contains a cup of crude oil – A CUP!  I also heard that the same nasties that we’re banned from women’s sanitary products are still in our babies nappies.  I don’t want that near my babies beautiful butt, BUT I don’t want to be stuck in the land of cloth nappies full time either, so I started digging around.

There are three main reasons that choosing a healthier option nappy is important to me:

1. Reduce Landfill and Waste: Did you also know a disposable nappy can take up to 500 years to breakdown in landfill?  Looking at our bins each week, we’re certainly keen to reduce that waste as well.

3. Reduce Nasty Chemicals: If you’ve been reading for a little while, you’ll know I started down the low tox path to reduce the toxins and chemicals my family was exposed too.  Alexx Stuart is the wonderful lady who introduced me to a whole new way of living (she wrote a great guest blog on The top 5 tips to bring up a low tox bub).

This is not a sponsored post, simply a collection of information that I’ve found interesting as I researched what was really in my babies nappy and tried to find the best solution for us.  Like most things I sit happily in the middle as a part time crunchy mum.  I’m not letting my baby run naked while I tried to toilet train him from birth – apparently it can be done!  I’m using a mix of commercial disposables, eco disposables and cloth nappies.

I had a brief vision as a “mum to be” that I’d happily use disposable nappies full time.  The reality was that my baby looked so tiny they would have been ridiculous AND I hadn’t gone all out so I never had enough.  They were benched for quite a few months….

I’ve found Eco Originals are great option for an eco disposable nappy – the reality is that sometimes when I need nappies, they are not readily available so we tend to grab what we can from the supermarket and when we do that, we get the big box.

These days I try to time when I choose to use a cloth nappy…. straight after a big poo, or before his bath – times when I feel fairly comfortable that I will not be dealing with dirty cloth nappies.  Although it’s really not that bad once baby is on solids, you pop in a flushable liner and peel it out and pop it in the toilet, drop the nappy in the soaking tub and then into the next baby wash.

Anyway, here’s some of the nitty gritty details and links I found:

Nappy Companies are not required to list what’s in their nappies according to Baby Centre who lists out whats in a disposable nappy – or diaper as a US site:

What’s in a disposable diaper?

While disposable diapers seem simple, they have more materials and parts than you might think. Diaper companies aren’t required to list what’s in their product on the packaging, but most modern disposables follow the same basic model:

The outer lining
The outer lining is usually made of polyethylene film, essentially the same stuff that’s in plastic wrap. (Some diaper use a bioplastic instead, made from renewable resources such as vegetable oil instead of petroleum.) The inner lining that touches your baby’s skin is usually made of polypropylene, a common material that’s also found in thermal underwear, among other things.

The absorbent core
A disposable diaper’s absorbent center contains wood pulp (usually bleached white with chlorine) and super-absorbent polymers, usually sodium polyacrylate – a compound that can soak up to 30 times its weight in urine. When introduced in the early 1980s, it allowed diapers to become both thinner and more effective at keeping babies dry.

Sodium polyacrylate is supposed to stay in the core of the diaper. But sometimes it leaks through the lining, leaving small transparent crystals on the baby’s skin.

Dyes
The cartoon characters and other images on the outside of many diapers are made with dyes such as Disperse Blue 106, Disperse Blue 124, Disperse Yellow 3, and Disperse Orange 3. Dyes may also be used in the elastic in back, in wetness indicators, and around the legs.

Scents
Scented diapers contain a small amount of perfume between the absorbent core and the outer layers. The perfumes typically contain citral, a citrusy-smelling compound often found in lemon and orange oils.

To avoid any of these ingredients, look for diapers that are dye-free, perfume-free, chlorine-free, and so on. They’re readily available for sale. Look for details on the packaging.

OK… the next step is to dig a little deeper and see if these ingredients are safe.  The big one for me is Phthalates that make fragrance last longer. A quick excerpt from the healthier baby wipe blog I wrote a while back:

BUT as always time is tight, so in the mean time I have found a great Australian Brand that ticks the majority of the boxes – Eco Originals 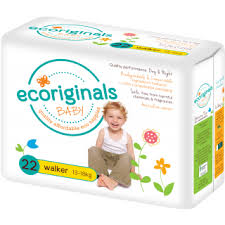 What makes their nappy eco?

There are many layers used to make a nappy.  Some of the key ingredients of our nappy are made from plant based materials, and we use a compostable leak barrier inside the nappy rather than the traditional plastic layer used in most nappies. We also use wood pulp sourced from certified sustainable forests. Our nappies are also free from chlorine, phthalates, fragrances, lotions, latex and heavy metals. This makes our nappy much more eco but also more breathable for bubs skin.

Our outer packaging is certified 100% compostable (a world first for a nappy product!) so it will break down easily in land fill.

Our intention is not to stop there with how eco our nappy is.  We know it’s not 100% compostable,  because the technology currently doesn’t allow for that. For example, there is nothing to replace thing’s like the plastic tabs that stick and hold the nappy in place on a baby yet to still offer this convenience for use.  However, we are committed to working with international biotech companies to search for new biodegradable technology so that overtime we can increase our compostability.  If a new exciting ingredient becomes available that performs well then we will integrate it into our nappy.

I could spend hours researching this and understanding it all and will keep learning, in the meantime, I’ll happily take a combination of the better choice.  Every little bit helps!

Let me know if you’ve found anything out that has been a real eye opener when it comes to nappies and baby care for your little one?

What to pack for a toddler in a caravan

Tips for Mums Starting a Business

Promotion and Branding Ideas If you Are a Freelancer

Tough Decisions Parents Have To Make While Pregnant

Emergency Planning at Home with Children

A letter to a tiny person on their first day here

The idea here, is to bring you a collection of the most interesting articles from around the massive online world, so you can come to just one place and find tips, tools and inspiration in just one place.
© © 2019 mumtips.com.au | All Rights Reserved
MORE STORIES
A dose of Reality

Things I Never Told My Younger Self but I Definitely Will...

Tracey Clayton - September 26, 2016
0
The moment you become a parent, everything about your life changes; you enter a spiral of feelings, fears, responsibilities, excitement, unconditional love and sudden...