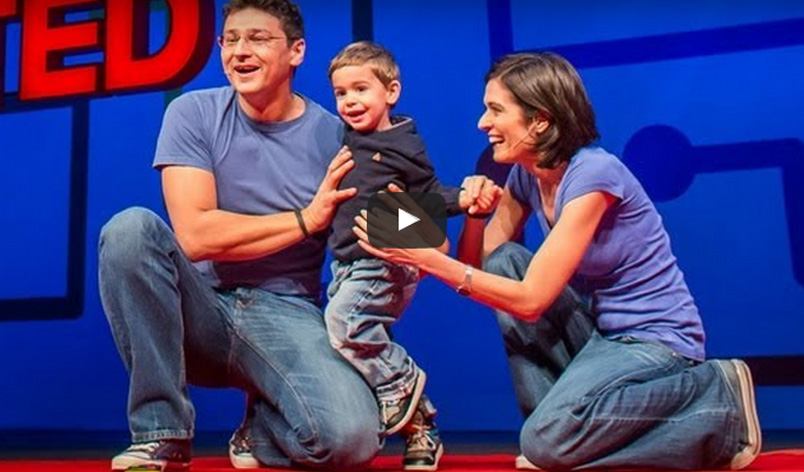 OK I’m re kindling my love affair with Youtube and Ted Talks….

Let me know what you think of these ones…

5 Dangerous Things You Should Let Your Children Do: Gever Tulley at TEDxMidwest

In his humorous and uplifting style, Gever Tulley debunks classic myths of childhood safety. With rampant fear mongering, is it any wonder that children are actually over-protected? Instead, Tulley believes the most effective way to keep children safe is to give them a little taste of danger.

Deb Roy: The birth of a word

http://www.ted.com MIT researcher Deb Roy wanted to understand how his infant son learned language — so he wired up his house with videocameras to catch every moment (with exceptions) of his son’s life, then parsed 90,000 hours of home video to watch “gaaaa” slowly turn into “water.” Astonishing, data-rich research with deep implications for how we learn.

Roberto D’Angelo and Francesca Fedeli thought their baby boy Mario was healthy — until at 10 days old, they discovered he’d had a perinatal stroke. With Mario unable to control the left side of his body, they grappled with tough questions: Would he be “normal?” Could he live a full life? The poignant story of parents facing their fears — and how they turned them around.

Steven Addis: A father-daughter bond, one photo at a time

A long time ago in New York City, Steve Addis stood on a corner holding his 1-year-old daughter in his arms; his wife snapped a photo. The image has inspired an annual father-daughter ritual, where Addis and his daughter pose for the same picture, on the same corner, each year. Addis shares 15 treasured photographs from the series, and explores why this small, repeated ritual means so much.

Bruce Feiler: The council of dads

http://www.ted.com Diagnosed with cancer, Bruce Feiler worried first about his young family. So — as he shares in this funny, rambling and ultimately thoughtful talk — he asked his closest friends to become a “council of dads,” bringing their own lifetimes of wisdom to advise his twin daughters as they grow.

The world is full of so much thought provoking information, the challenge is in sifting through the noise to find the relevant life changing information to you.

I hope you enjoy these!

Key Questions Every Family Should Ask Before Moving Abroad

Caring For Your Child In The Summer Heat

QuickStart Guide To Toddler-Proofing Your Home

The Family Medical Checks You Should Have Regularly

The idea here, is to bring you a collection of the most interesting articles from around the massive online world, so you can come to just one place and find tips, tools and inspiration in just one place.
© © 2019 mumtips.com.au | All Rights Reserved
MORE STORIES
New Mum Challenges

Getting ready for cold and flu season with a baby

Shona - June 7, 2016
0
Winter AKA 3 month Snotty nose, cold and flu season is here! Navigating it as a first time mum can be tricky to work your way through...